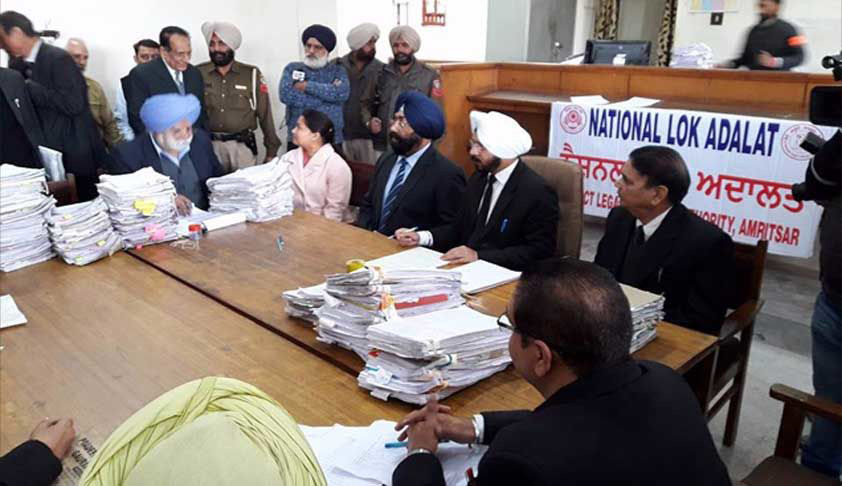 Lok Adalat is one of the alternative dispute redressal mechanisms, it is a forum where disputes/cases pending in the court of law or at pre-litigation stage are settled/ compromised amicably. Lok Adalats have been given statutory status under the Legal Services Authorities Act, 1987. Under the said Act, the award (decision) made by the Lok Adalats is deemed to be a decree of a civil court and is final and binding on all parties and no appeal against such an award lies before any court of law. First time lok adalat was held in Gujarat in 1999.

Lok Adalat is a system of a dispensation of justice which has come into existence to grapple with the problem of giving cheap and speedy justice to the people. Lok Adalat as the very name suggests means People’s Court. ‘Lok’ stands for “People” and the ‘Adalat’ means “Court”.

The Lok Adalat has also been organized even for the cases pending in the Supreme Court.

Lok Adalats are known as People’s festivals of justice because settlements are not always necessarily according to legal principles settlements have an eye mainly on;

Nature and Scope Of Lok Adalat

Generally speaking, Lok Adalat is not a court in its accepted connotation. The difference between Lok Adalat and law court is that the law court sits at its premises where the litigants come with their lawyers and witnesses and go to the people to deliver justice at their doorstep. It is a forum provided by the people themselves or by interested parties including social activities or social activist legal aides, and public spirited people belonging to every walk of life.

Article 39A of the constitution of India provides for free legal aid to the poor and weaker sections of the society and ensures justice for all. Article 14 and 22(1) of the Indian constitution is fundamental right mentioned in part Ⅲ. It also makes it obligatory for the state to ensure equality before law and a legal system which promotes justice on the basis of equal opportunity to everyone.

Here, the free legal services include:

The persons eligible for getting free legal services include:

Types of cases at Lok Adalat

The types of cases dealt with generally are:

Generally, a Lok Adalat consists of-:

A Lok Adalat shall have jurisdiction to determine and to arrive at a compromise or settlement between the parties to a dispute in respect of:

Thus, the Lok Adalat can deal with not only the cases pending before a court but also with the disputes at pre-litigation stage.

Provided that no cases shall be referred to the Lok Adalat by such court except after giving a reasonable opportunity of being heard to the parties.

Lok Adalat shall have the same powers as are vested in a civil court under the Code of Civil Procedure (1908), while trying a suit in respect of the following matters:

Without prejudice to the generality of the powers contained in sub section (1) of Section 22, “Every Lok Adalat shall have the requisite powers to specify its own procedure for the determination of any dispute coming before it.”

Every award of the Lok Adalat shall be deemed to be a decree of civil court or as the case may be, an order of any other court and where a compromise or a settlement has been arrived at, by a Lok Adalat in a case referred to it under sec. 20(1), the court fee paid in such case shall be refunded in a manner provided under the court fee Act, 1870.

Even an award made by a Lok Adalat shall be final and binding on all the parties to the dispute and no appeal shall lie to any court against the award.

Thus, Lok Adalat is very effective in settlement of money claims. Disputes like partition suits, damages and matrimonial cases can also be easily settled before Lok Adalat, as the scope for compromise through an approach of give and take is high in these cases. A Lok Adalat can take up civil cases (including marriage, and family disputes) and compoundable criminal cases.

Conciliation Meaning and Procedure In India