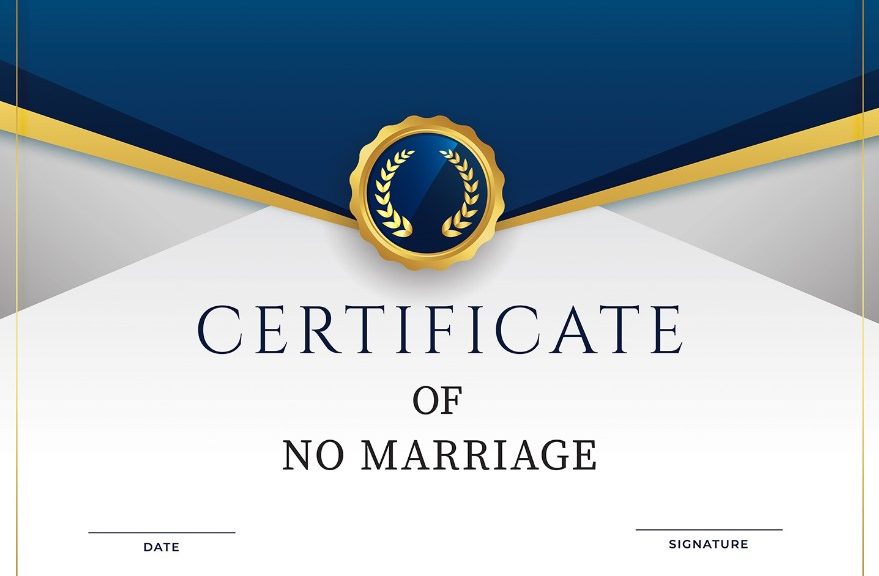 What Is A Bachelor Certificate?

A Bachelor Certificate is the Certificate which proves that a particular person is un- married and single in status. In India, there is no prior requirement to issue a show cause notice to prove singlehood of the spouse before getting married. Although, there is a provision to certify marriage under the Hindu Marriage Act, 1955 (for Hindus) and the Special Marriage Act, 1954 (for Religion other than Hindu). However, if an Indian NRI wants to get married abroad there is a requirement to prove that he is single at the present time. Almost every European country and some Asian countries, like the Philippines, Malaysia, China and Indonesia, have provision to present the certificate of no marriage record (CENOMAR). Despite being known with different names, the motto of all of these docs is synonymous, i.e. to prove the singleness of an individual.

Similar Names Of This Document Used In Other Countries

There are many other names of this document. Some of them are as follows:

Do You Require This Certificate?

This certificate is required by only few people who fall under the category of:

Why Do You need a Single Status Certificate?

The need of single status certificate falls under many criterion:

What Documents Do You Require To Get Single Status Certificate?

The requirement of this document falls under two categories of people (a) Bachelor’s (b) Divorced/Widowed. However, all the documents are more the same but the latter has to submit some additional documents in contrast to the former applicant.

For Divorced/Widowed- In addition to the foregone proofs, the divorced applicant have to submit:

A Certificate of Bachelorhood/single-status/eligibility to get married can be issued by a competent court having jurisdiction of the area of the residential address of the applicant. However there are many institutions which play a vital role in issuing this certificate. They are as follows:

What Is The Procedure To Get A Single Status Certificate?

There is a 7 steps required  procedure to get your single status certificate. These steps are to be followed in a chronological way:

What Is The Format Of A Single Status Affidavit?

An affidavit is a series of statements confirmed by an oath or affirmation given by the applicant which is used as evidence in courts. A person needs to get an affidavit declaring that he is at present single. In order to write an affidavit following statements and formats are used which should be kept in mind such as;

I, Name, S/o Mr. Father’s name and Mothers name, residing at Address, INDIA. Do hereby solemnly affirm and declare as under:

However the point to be noted is that the format keeps on changing from time to time as per the law. Therefore one must be updated with the current format. A sample of Single Status Affidavit is given below

How Much Money Is Required?

The cost of the process depends on the process. The only fixed fee is the one to be paid at the MEA. The rest of the cost varies from state to state, on the facilities obtained through the agency, the type; apostille or attestation, etc. However the minimum cost as per as the estimate are given below:

If you get the Home/SDM attestation and Apostille done via an authorised agent, they charge anywhere from INR2000-3000 depending upon the location.

How Much Time Does It Require?

The duration again depends on the procedure. The DM or SDM usually have long queues and complex bureaucratic procedures. Apart from this, certificate apostille and certificate attestation both take different amounts of time. It could take much longer for the affiant to go through these hurdles by themselves. However, if using the help of an Attestation and Apostille agency, it could be done faster and is normally done in 10 days.

It is advisable to follow the guidelines that certain authorities deem necessary. Those wishing to marry overseas will need special documentation. First, couples will have to present a declaration that is processed by your local office where marriage documents are produced. This must be from the state where you live in India. This statement will be recorded the fact that there has not been any marriage in recent years.

Due to the fact that these types of documents are sought for foreign involvement one will need the local or state registrars account or declaration to be authenticated to work abroad.

How To Obtain A Divorce Decree In India