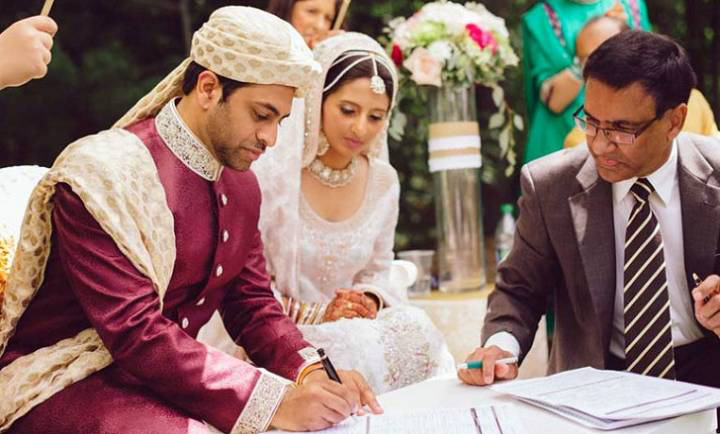 The dower may be classified into:

The husband may settle any amount he likes by way of dower upon his wife, though it may leave nothing to his heirs after payment of the amount. But according to Hanafi Law, he cannot in any case settle less than 10 dirhams (the money value of 10 dirhams is between 3 and 4 rupees)  and according to Maliki Law, the minimum value for settlement is 3 dirhams. However, Shia Law does not fix any minimum amount for dower.

For those Muslim husbands who are very poor and not in a position to pay even 10 dirhams to the wife as dower, the Prophet has directed them to teach Quran to the wife in lieu of dower. At present there is no limit to the maximum amount of dower. The minimum has now become obsolete.

As already stated, specified dower is again subdivided into:-

It is payable immediately after marriage on demand. According to Ameer Ali “a wife can refuse to enter into the conjugal domicile of husband until the payment of the prompt dower.”

The following point must be noted regarding prompt dower:

If the wife is minor, her guardian may refuse to allow her to be sent to the husband’s house till the payment of prompt dower. In such circumstances, the husband is bound to maintain the wife, although she is residing apart from him.

It is payable on the dissolution of marriage either by death or divorce. According to Ameer Ali generally in India Dower is a penal sum with the object to compel husband to fulfill marriage contract in its entirety.

The following points must be noted regarding deferred dower:

When the amount of dower is not fixed in the marriage contract or even if the marriage has been contracted on the condition that she should not claim any dower, the wife is entitled to Proper Dower.

Proper dower is to be determined by taking into consideration the amount of dower settled upon other female members of the father’s family such as her father’s sisters.

The amount of proper dower is decided on the basis of following factors:

In case where in the marriage contract (Kabin-nama), it is not specified that which portion of the amount decided for the payment of dower will be prompt and which portion will be deferred, according to Allahabad and Bombay High Courts held that the proportion between the two should be fixed on the basis of-:

It has been held in Rehana Khatun vs Iqtidar-uddin, 1943 that “the proportion of prompt dower is regulated by custom, and, in absence of custom, the total amount of dower is to be settled on the basis of the status of the parties.”

Under Ithna Ashari Shia law if the (Kabin-nama) fixes the total amount of dower but does not specify as to what portion of it will be prompt and what deferred then the whole of the dower is regarded as prompt.

In the case of  Hussain Khan v. Gulab Khatun, 1911 Bombay HC held that in such cases the court would regard the whole amount as prompt dower irrespective of the fact that parties are Shia or Sunni.

According to Sunni Law, in the absence of any family usage and statement in Kabin-nama, half of the total amount is regarded as prompt and half as deferred.

Effect Of Apostasy Of Dower

Apostasy is called Ridda in Islamic literature. An apostate is called ‘Murtad‘, which means ‘one who turns back’ from Islam. A person born to a Muslim parent who later rejects Islam is called a ‘Murtad Fitri’. Similarly, a person who converted to Islam and later rejects the religion is called a “Murtad Milli.“

Effects Of Limitation Law on Suits Relating To Dower

If the dower is not paid to the wife and her heirs may sue for it. The period of limitation, according to Article 113 of the Limitation Act, for a suit to recover prompt dower is 3 years from the date when the dower is demanded, refused; or where during the continuance of the marriage no such demand has been made and where the marriage is dissolved by death or divorce.

In the case of Deferred Dower, the period of limitation is 3 years, from the date when the marriage is dissolved by death or divorce.

Mount of Dower and Condition of Payment

Tabyabji has classified the condition of payment into 2 parts-:

Where the dower is fixed, unspecified and irregular:

Where the wife is divorced by the husband without consummation or valid retirement, the wife is entitled to receive:

The Kharche-i-pandan literally means “betel box expenses and is a personal allowance to the wife customary among families of rank specially in upper India”. It is also called an allowance for Mewakhori (eating fruits).

When the parties are minors, the contract is made between the respective parents and in such a case the wife as beneficiary is entitled to enforce it. In the case of Shikandar Ara vs Hussain Ara (1916),  it was held that

“Kharche-i- pandan is fixed either before or after marriage and according to the means and position of the parties.”

Muslim jurists have compared Kharche-i-pandan to ‘pin money’ found in English Law. But there is some difference between the two. The Kharche-i-pandan is payable to the wife so long as she lives with her husband and she can spend the same without any control of the husband.

However, the ‘Pin Money’, is spent during coverture with the advice and at the instance of the husband.

Difference Between Shia & Sunni Law In Respects to Dower

The law of Mahr varies from Shia and Sunni schools of thought.

In Islamic Marriages Law, the custom of paying Dower is still practiced. In Islamic marriages, the payment of dower is still required. Women have special rights to seek their unpaid dower, and their husbands are legally compelled to pay it, according to the case law.