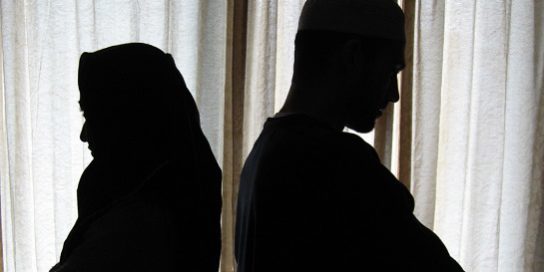 The whole law with regard to maintenance of Muslim divorced woman is based on the following Quranic verses:

“Let the woman live (in iddat) in the same style as you live, according to your means, annoy them not, so as to restrict them. And if they carry (life in their womb) then spend (your substance) on them until they deliver their burden and if they suckle your (offspring) give them their recompense.”

“And for the divorced woman, let there be a fair provision. This is an obligation on those who are mindful of God.”

These verses give a clear-cut picture that a divorced woman is entitled for maintenance till the expiry of the iddat period. In case she is pregnant this period extends upto the delivery.

Under Muslim Law, a divorced wife is entitled to be maintained by her former husband during the period of iddat.

According to Muslim law on the expiration of the period of iddat, the wife is not entitled to any maintenance. Under any circumstances Muslim law does not recognize any obligation on the part of a husband to maintain a wife with whom he had divorced.

In the present case, a 62 year old woman was divorced and subsequently denied maintenance. She had not remarried. On moving the court of the Judicial Magistrate at Indore under section 125 of the CrPC, and claiming maintenance of Rs 500 per month, she was awarded a maintenance of Rs 25 per month from the husband. Aggrieved by the low amount, she filed a revision petition before the Madhya Pradesh High Court, which entitled her to a maintenance of Rs 179.20 per month. The husband appealed against this order before the Supreme Court, his main contention being that since the dissolution had taken place, she ceased to be his wife and under Muslim law, he was not obliged to pay her maintenance. Also, since he had paid the dower amount during the Iddat period, the wife was not entitled to any maintenance.

The Supreme Court dismissed the appeal and upheld the decision of the High Court. The Supreme Court explained this judgment by saying that, even if there is a conflict, Section 125 of CrPC is a secular law, and hence, applies to all women, irrespective of their religion. It further stated that CrPC shall prevail over Muslim Personal Law in case of a conflict.

This judgment resulted in the massive uproar by the islamist groups against the said judgement.

The Rajeev Gandhi government, coming under pressure from Islamist groups decided to nullify the judgment, and in an effort to do the same, it passed The Muslim Women (Protection Of Rights On Divorce) Act, 1986.This act became one of the most controversial legislations enacted. The relevant provisions of this act are sections 3(1)(a) and 4(1), which stated that the former husband must provide “a reasonable and fair provision” and maintenance within the period of iddat and, that in case she is unable to maintain herself after the period of iddat, she can claim maintenance from her relatives and if they cannot pay, then she can claim from the Wakf Board as per S.4(2), respectively.

Post Enactment of The Muslim Women (Protection Of Rights On Divorce) Act, 1986

In this case, a writ was filed under Article 32 challenging the constitutional validity of the Act. The court concluded that, one, the Act does not violate Articles 14, 15 and 21 and hence, is not ultra vires.

The court made the following interpretations:

Maintenance of a Divorced Woman under Section 125, Cr.P.C.

Under Section 125 of the Criminal Procedure Code, 1973, the term, ‘wife’ includes a divorced wife or a wife who has obtained a divorce from her husband and has not remarried. Under the Muslim Law, the husband is liable to maintain his divorced wife till the period of iddat only and his liability to maintain the divorced wife terminates after this period.

In Zohra Khatoon v. Mohd Ibrahim, the Supreme Court has held that the word ‘wife’ in Section 125(1) Explanation (b) of Cr. P.C, 1973 includes a woman who has obtained a decree for dissolution of her marriage under any of the provisions of the Dissolution of Muslim Marriages Act, 1939.

The principle has been reiterated by the Supreme Court once again in Iqbal Bano V/s. State of U.P. In the case the court reiterated the position that divorced women are entitled for maintenance beyond the Iddat period and stated that provisions of the Act do not contravene Article 14, 15 & 21 of the Indian Constitution.

This was once again reiterated in the recent judgement in Shabana Bano v. Imran Khan that “after the expiry of iddat, a divorced Muslim woman can seek maintenance under S.125CrPc as long as she doesn’t re-marry. Hence, the position as laid down in the Daniel Latifi case is the settled position and has not undergone any change”.

It can be concluded that, the new law is in terms of Section (3)(a) of the Muslim Women (Protection of Rights on Divorce) Act, 986, a Muslim husband is liable to make reasonable and fair provision for the future of the divorced wife. This includes her maintenance as well.

Accordingly, the husband has to make a fair and reasonable provision for the maintenance of the wife beyond the iddat period as per the terms of Section 3 (1) (a) of the Act.

Also, a divorced Muslim woman who has not remarried and who is not able to maintain herself after iddat period can claim maintenance under Section 4 of this act from her relatives who are entitled to her property after her death. This has provided additional rights to Muslim women.