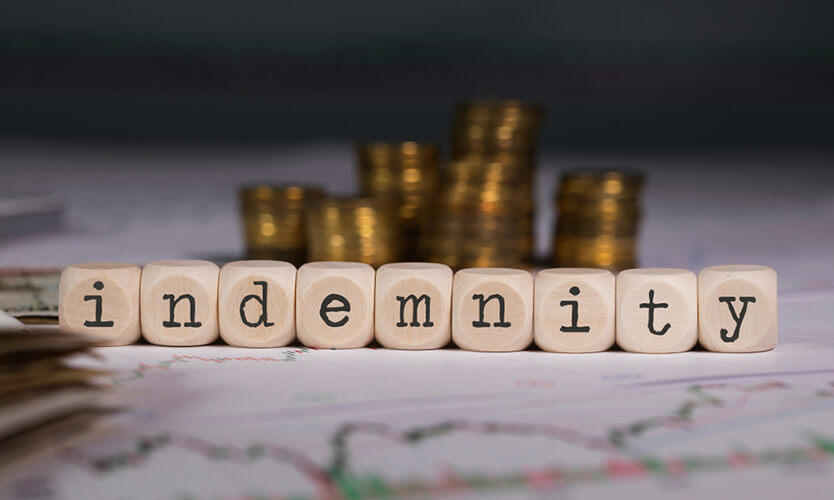 An indemnity agreement is a contract that does not hold a business or company liable for any burden, loss or damage. An illustration in the English law of the meaning and effects of a contract of indemnity is to be found in the facts of Adamson vs Jarvis,

The court laid down that the plaintiff having acted on the request of the defendant was entitled to assume that, if, what he did, turn out to be wrongful, he would be indemnified by the defendant.

Thus indemnity in the English law means a promise to save a person from the consequences of an act. The promise may be expressed or it may be implied from the circumstances of the case.

The court held that the plaintiffs were entitled to recover indemnity from the defendants on an implied promise as evidence, by the fact that by demanding an indemnity, they made it quite clear that they had no intention to deliver except on indemnity.

Thus, the English definition of indemnity is wide enough to include a promise of indemnity against loss arising from any cause whatsoever. For example- Loss caused by fire or by some other accident.

The definition given under Section 124 of the Indian Contract Act 1872, is somewhat narrower than English definition. It says that:

“A contract by which one party promises to save the other from loss caused to him by the contract of the promisor himself, or by the conduct of any other person, is called a Contract Of Indemnity”

A contract to indemnify B against the consequences of any proceedings which C may take against B in respect to a certain sum of 2000 rupees. This is a contract of indemnity.

According to the given definition under Section 124 of the Indian Contract Act 1872, the scope of Indemnity is restricted to the cases where there is a promise to indemnify against loss caused:

The definition however excludes from its purview cases of loss arising from accidents like fire or perils of the sea. Secondly, situations like those in Adamson vs Jarvis, where cattles were sold under the instruction of a wrongful owner, are also outside the scope of this definition. Such cases and the cases of loss arising from an act done at the request of the promisee are covered by Section 223 of the Indian Contract Act, which provides for an indemnity between the principal and agent.

Also the promise of Indemnity, as envisaged by the section, may be expressed or implied. An illustration of implied indemnity is given in the decision of State Of India In Council vs Bank Of India Ltd,

In this case a note with forged endorsement was given to a bank which received it for a value and in good faith. The bank sent the note to the public debt office for renewal in the owners name. The true owner of the note recovered compensation from the state and the state was allowed to recover from the bank on an Implied Promise Of Indemnity.

Similarly, in the case of Dr P.N.V.S vs UOI, 1994, An indemnity bond which permits an employee to leave the employment earlier than the minimum agreed period only at the cost of the forfeiture of his bond money is valid, provided that both the period of restriction and the bond money are reasonable. Only that part of bond money can be retained which is necessary to indemnify the employer for his loss.

Section 125 of the Indian Contract Act, talks about the Rights of Indemnity Holder when sued. It says that ” The promisee in a contract of indemnity acting within the scope of authority is entitled to recover from the promisor-

The rights of the indemnifier have not been mentioned expressly anywhere in the Act. In the case of Jaswant Singh vs Section Of State, 14 Bom 299,  it was held that the rights of the indemnifier are similar to the rights of a surety under Sec. 141 of the Indian Contract Act, 1872, Where he becomes entitled to all the securities that a creditor has against the principal debtor whether he was aware of them or not. Where a person agrees to indemnify, he will, upon such indemnification, be entitled to succeed to all the ways and means by which the person originally Indemnified might have protected himself from any loss or set up a compensation for that loss.

An important question arises when does the indemnifier become liable to pay or when is the indemnity-holder is entitled to recover his indemnity.

In English law, indemnity was payable only after the indemnity-holder had suffered actual loss by paying off the claim. The maxim of law was: “You must be damnified, before you can claim to be Indemnified” But the law now is different. The process of transformation of law is well explained by Justice CHAGLA of the Bombay High Court in the case of

Gajanan Moreshwar Parelkar vs Moreshwar Madan Mantri (1942), he says that it is true that under the English common law no action could be maintained until the actual loss has been incurred. It was very soon realised that an indemnity might be worth little indeed, but the Indemnified could not enforce his indemnity till the judgement was pronounced, and it was only after he had satisfied the judgement that he could sue on his Indemnity. It is clear that this might under certain circumstances throw on intolerable burden upon the indemnity-holder. He might not be in a position to satisfy the judgement and yet he could not avail himself on his indemnity till he had done so.

Therefore, the court of equity stepped in and mitigated the rigor of the common law. The court of equity held that if his liability had become absolute then he was entitled either to get the indemnifier to pay off the claim or to pay into court sufficient money which would constitute a fund for paying off the claim whenever it was made.

This principle was founded in the Richardson Re case, where Buckley J observed: “Indemnity is not necessarily given by repayment after payment. Indemnity requires that the party to be indemnified shall never be called upon to pay.

In this case, A company was acting as the commission agents of the defendant’s firm and in that capacity brought certain goods for the defendants which they failed to take. The suppliers became entitled to recover from the company a certain sum of money as damages for breach of contract. The company went into liquidation before paying the claim.

The High Courts of Allahabad, Madras and Patna have expressed their concurrence in the principal that as soon as the liability of the indemnity holder to pay becomes clear and certain, he should have the right to require the indemnifier to put him in a position to meet the claim. But contrary views have also been expressed.

It implies that the act should be done with all the convenient speed. In other words, nothing to be done should be done as quickly as is reasonably possible.

In the case of Praful Kumar vs Oriental insurance Co Ltd,

Facts of the case

The court said that the expression immediately implies that notice to be given with promptitude avoiding unnecessary delay. Immediate police report showed the Bonafide of the assured in the matter. Reporting to the insurance after one month could not be regarded as unreasonable. Therefore, indemnification could not be denied.