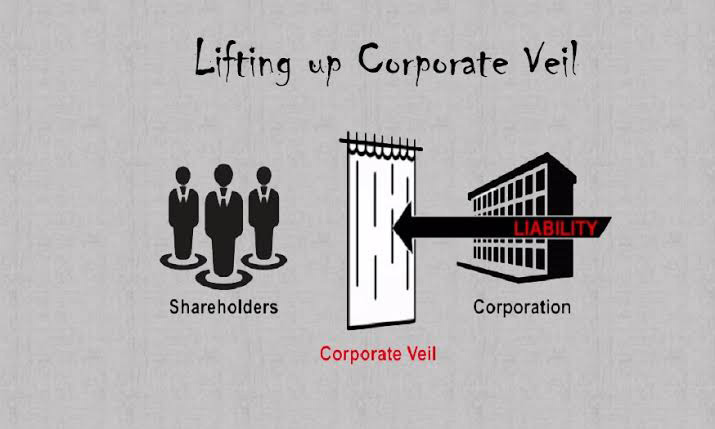 The doctrine of lifting the corporate veil means ignoring the corporate nature of the body of individuals incorporated as a company. A company is a juristic person, but in reality it is a group of people who are the beneficial owners of the property of the corporate body. Being an artificial person, it (company) cannot act on its own, it can act only by natural persons. The doctrine of lifting the veil can be understood as the identification of the company with its members. The company is equal in law to a natural person. This is one of the cornerstones of Indian Company Law and has been followed since 1897.

In the case of Salomon Vs. Salomon & Co. Ltd. 1897 it was considered from the Justice point of view “a company is a legal person distinct from its members. This principle is regarded as a veil/curtain/shield but not a wall between the company and its members. The effect of this principle is that there is a fictional veil and is permitted to look at the person behind the veil.”

According to the Cambridge Dictionary, “Shareholders may hide behind the corporate veil, assured that their liability does not extend beyond the value of their shares”.

According to the definition of Black Law Dictionary, “piercing the corporate veil is the judiciary act of imposing liability on otherwise immune corporate officers, Directors and shareholders for the corporation’s wrongful acts.”

Aristotle says, “when one talks of lifting status of an entity corporate veil, one has in mind a process whereby the corporate is disregarded and the incorporation conferred by statute is overridden other than the corporate entity an act of the entity.”

Company As A Corporate Personality

Corporate personality is the reality expressed by the law that a company is perceived as a legal entity distinct from its members. A company with such recognition and personality will be considered as a separate legal entity having an independent legal existence from the members of the company. A company is known by its own name and has its own rights, duties, obligations, and liabilities. Therefore, there is a clear difference between the company and its members, this is commonly called a Corporate Veil as discussed above.

In both these cases it was held that ” The Company was a separate person member, and It has an identity different from its members and therefore, the unsecured creditors were to be paid at priority from the secured debentures”. This Judgement is very important with respect to Indian companies act as it lays the precedent that a company has a separate legal entity and it can enter into contracts with its own members.

Circumstances under which the Corporate Veil can be Lifted

There are two circumstances under which the Corporate Veil can be lifted. They are:

Section 5 of the Companies Act, 2013- This particular section characterizes the distinctive individual engaged in wrongdoing or a conduct which is held to be wrong in practice, to be held at risk in regard to offenses as ‘official who is in default’. This section gives a rundown of officials who will be at risk to discipline or punishment under the articulation ‘official who is in default’ which includes within itself,  an overseeing executive or an entire time chief.

In the case of Madan lal v. Himatlal & Co. the respondent documented a suit against a private limited company and its directors because he had to recover his dues. The directors opposed the suit on the ground that at no time did the company carry on business with individual count which was to go below the statutory minimum and in this manner, the directors couldn’t be made severely at risk for the obligation being referred to. “It was held that it was for the respondent being dominus litus, to choose the people himself who he wanted to sue.”

Section 147 of the Companies Act, 2013 Misdescription of name: Under sub-section (4) of this section, an official of an organization who signs any bill of trade, hundi, promissory note, check wherein the name of the organization isn’t referenced in the way that it should be according to statutory rules, such official can be held liable on the personal level to the holder of the bill of trade, hundi and so forth except if it is properly paid by the organization. Such a case was seen on account of Hendon v. Adelman.

Subject to the provision of Section 278, this section provides that no individual can be a director of in excess of 15 companies at any given moment. Section 279 furnishes for a discipline with fine which may reach out to Rs. 50,000 in regard of every one of those companies after the initial twenty.

The object of this section is to restrict a director and anybody associated with him, holding any business which provides compensation if the company supports it.

Pretentious Conduct: If over the span of the winding up of the company, it gives the idea that any business of the company has been continued with goal to defraud the creditors of the company or some other individual or for any deceitful reason, the people who were intentionally aware of this and still agreed to the carrying on of the business, in the way previously mentioned, will be liable on a personal level without incurring the liabilities of the company, and will be liable in a manner as the court may direct.

In Popular Bank Ltd, it was held that the Section 542 seems to leave the Court with attentiveness to make an assertion of risk, in connection to ‘all or any of the obligations or liabilities of the company’.

In this situation, Hoax or façade is being talked about. A private coal company sold its real estate to the spouses of executives before nationalization of the company. Truth be told,archives were tweaked and back-dated to corroborate that the deal of the selling of the real estate to the wives of the directors was before nationalization of the company. Where such exchange is claimed to be a hoax and deceitful, the Court was supported in piercing the veil of incorporation to discover the genuine idea of the exchange as to realize who were the genuine parties to the deal and whether it was real and in good faith or whether it was between the married couples behind the façade of the different entity of the company.

This case is about a Subsidiary Holding Company. The court, to consider an objection of mistreatment held that the corporate veil can be lifted in the instances of not simply of a holding company, but also its subsidiary when both are belonging to the parent organisation.

In this case, the merchant of a real estate property tried to dodge the particular execution of a contract for the clearance of the land by passing on the land to a company which he shaped for the reason and along these lines, he attempted to abstain from finishing the property deal of his home to the offended party. Russel J. depicting the company as a “devise and a hoax, a veil which he holds before his face and endeavors to stay away from acknowledgment by the eye of equity” and requested both the litigant and his company explicitly to fulfil the obligations of the contract to the offended party.

Exceptions Of Lifting Of Corporate Veil

The corporate veil of a company will be lifted only in exceptional cases such as follows;

Reduction of number of members below statutory minimum

In the case of a private company with less than 2 members and 2 directors. Severally liable for the payment of whole debts of the company contracted during that time and may be severally sued thereof.

Under Section 39 of the Companies Act, 2013 the director of the company shall be jointly and severally liable to repay that money with interest at the rate of 6% per annum from the expiry of the 133 days if they fail to repay the application money without  interest within 120 days when the company fails to allot shares.

Under Section 12 of the Companies Act, 2013 if an officer of a company signs, or authorizes to be signed, on behalf of the company, any bill of exchange, hundi, promissory note, endorsement, cheque or order for money or goods wherein its name is not mentioned, apart from penal liability, the officer becomes personally liable on those instruments.

Under Section 339 of the Companies Act, 2013 every person knowingly a party to the carrying on of the business in the manner aforesaid, shall be punishable with imprisonment for a term which may extend to two years or with fine which may extend to fifty thousand or with both.

Separation is ignored for the purpose of group accounts.

For investing in a company’s ownership

Under Section 216 of the Companies Act, 2013 the central government may appoint inspectors to investigate and report on the membership of any company for the purpose of determining the true persons who  are financially interested in the company and who control its policy. Thus the central government has authority to ignore the corporate veil.

Company Law is a wider concept based on commercial law. It states about all legal rights, relation, and conduct of a persons, companies, organizations & businesses and its formation, funding, governance & death of a corporation. This act deals with the powers, privileges, obligations, objects and scope of the companies. It also helps in economic growth and developments.