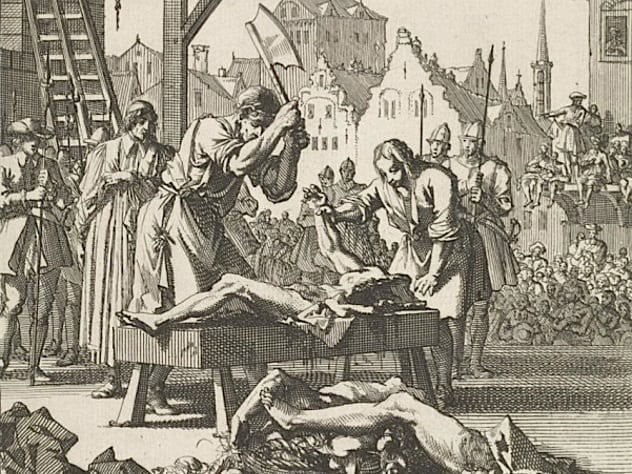 Civil Wrong Theory– This theory regards criminal law as originating in torts, or wrongs to individuals. According to this theory, all wrongs produced efforts at self redress in the injured parties and were therefore treated as injurious to particular individuals. Later, the wrong came to be regarded as harmful to the society at large.

Consequently, the group took over charge of the treatment in its own hand. Of course some of the crimes did originate in torts such as deceit, nuisance, false imprisonment, defamation etc, for which compensation was secured from the wrongdoer. However this theory is inadequate as a universal explanation of criminal law as it assumes priority of the individual over the group.

Social Wrong Theory– This theory postulates that criminal law originated as a rational process of unified society. Thus, when wrongs occur, society makes regulations in order to prevent the repetition of such wrongs. This theory again is partially true. It certainly covers serious offences like murders, rape, robbery and dacoity etc, and explains how laws are made, but fails to explain how criminal law has developed in the course of time.

Moral Wrong Theory- This theory states that criminal law originated in and is a crystallization of mores,tradition and customs. Custom after persisting for a long time achieved an ethical foundation. Violation of such customs produced antagonistic reactions of the groups that were expressed in the form of criminal law with penal sanctions. This is true in respect of conventional crimes such offences against person, property and reputation.

However, it does not explain many social and economic crimes that deal with the regulations of offences relating to evasion of taxes, licensing, hoarding, blackmailing of essential commodities and food adulteration etc.

Group Conflict Theory– This theory holds that criminal law developed in the conflict of rival groups in order to protect each other’s interest. Thus, through criminal law, the state is to prohibit the conduct when they feel it may endanger their position. This theory may explain offences relating to property but fails to explain other categories of offences such as offences against the state and public tranquility etc.

During the Vedic Age, when the process of formation of society and the state was over, it was felt that there should be an organised administration which could give justice. For the purpose of public peace and advancement this was a necessary factor because in case of disturbance, social and religious progress was not possible. From this it can be easily inferred that ancient Indian society was not static, it was dynamic. There are many legal literatures which give us the understanding of the development of criminal law in the Ancient Vedic Period.

Sutras- A Sutras is a pithy formulation of broad and general principles of common sense and Justice. These principles were unambiguous, universal and logically sound given by the pandits and brahmins. The Kalpa Sutras are the oldest Sutra works. It is of three types-

Smiritikaras were more interested in formulating a system of rules for the welfare of society and social solidarity. They have played a very important role in preparing rules for regulating the social and religious life of the people. Manu being the most famous and outstanding figure in the history of law givers of antiquity. The germ of criminal jurisprudence came into existence in India at the time of Manu. He gave a comprehensive code which contains not only the ordinances relating to law but is a complete digest of the then prevailing religion, philosophy and customs practice by the people. This code is still valuable and regulates the conduct and nature of Indian society.

The code as 2685 versus it devotes 3 Chapter (7,8,9) to discuss the kings and state functionaries, the judiciary, sources of law and its classification, punishment ,role of judges, principles of taxation, war and diplomacy and the ethical principles of welfare. According to him, Dharma was the supreme power in the state. Even the king was subject to law, he was merely an instrument to realise a social goal of Dharma. State was not an end in itself but a means to an end to attain 4 Purusharthas viz, (Dharma, Arth, Karma and Moksha).

Manu has classified law under 18 titles. He has recognised assault, battery, theft, robbery, false evidence, libel, slander, criminal breach of trust, adultery, gambling and homicides as crime. These are the principal offences against person and property that occupy a prominent place in the Indian Penal Code. The King used to either dispense justice himself or with the help of his counselors, or appoints judges and assessors for the administration of criminal justice

The British who ruled India used Manusmriti as the standard to settle disputes among Hindus with regards to matters of inheritance, family disputes, marriages and royal succession. Manu also made provision for the exemption from criminal liability, where the act was done without any criminal intention or by mistake of fact or by consent or was a result of accident much on the lines provided in Chapter 4 of the IPC.

Although the precepts of law given by Manu are excellent. However, the substantive criminal jurisprudence of Manu is not free from bias. According to him, the gravity of offenses varies with the caste and creed of the criminal and so does the sentence. The protection given to the brahmins was paramount and they were placed above all others. Such discriminatory provisions are against the principles of natural justice.

Manu also dehumanizes women and levels down their position. According to him “It is the nature of women to seduce men in this world, One should never sit alone with one’s mother, daughter or sister. Since carnal desire is always strong it can lead to temptation” Such discrimination, prejudice and hate is against the principles of constitution Pof India, therefore as of today is principals given Manu are rejected.

Also, Manu made no clear distinction between the private and public wrongs. Murders and other homicides were considered as private wrongs. The right to claim compensation was the rule of the day. A distinction was however drawn between casual and hardened criminals.

Brihaspati – Brihaspati tells us about seven courts. His concern for even handed justice becomes evident when he amplifies rules relating to different classes of evidence with their characteristics. He has also given kinds of witnesses. Minimum number of witnesses was three, provided they were learned Brahmans. But a single witness should never be entertained.

Yajnavalkya– He arranged the material of Manusmriti in a systematic and concise manner. He was the first to mention specifically three popular courts, namely Khula, Sreni and Puga arranged in the ascending order of their importance. He has also described systematically the process of judicialNarada- procedure. He observed that the mode of threw was three fold-: Documents, Witnesses and Possession.

Narada- He provides the first legal commentary which is not loaded with the precepts of religion and morality. However, the legal procedure advocated by him is a highly complex one. Narada amplifies and explains the views of Manu in respect of witnesses and divides them into 11 classes.

Katayana– Katayana makes a “triumvirate” in the realm of Hindu Law and procedure, the other two being Brihaspati and Narada. He gives a detailed account of the Constitution of the courts of justice and gives an elaborate description of the courts procedure. He refuses a remedy if it is not sanctioned by the usages of the country.