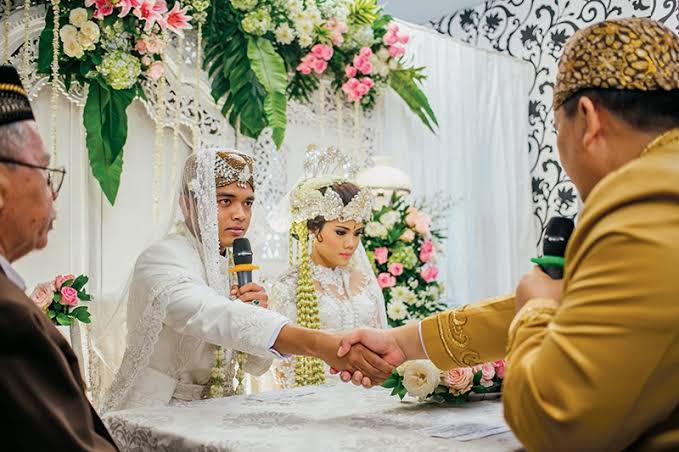 Marriage i.e. (Nikah) in pre-Islamic Arabia, meant different forms of sex relationship between a man and a woman established on certain terms. In pre-Islamic days, women were treated as chattels, and were not given any right of inheritance and were absolutely dependent. It was Prophet Mohammad who brought about a complete change in the position of women. He placed women on a footing of almost perfect equality with men in the exercise of all legal powers and functions, which stand in bold relief when compared with the state of law amongst the ancient Arabs of the pre-Islamic days.

Under the Muslim law marriage is considered as civil contract. After marriage, a woman does not lose her individuality. She remains a distinct member of the community; her existence of personality is not merged into that of her husband. The contract of marriage gives no power to anyone over her person or property beyond what the law defines. Woman remains the absolute owner of her individual rights; even after marriage, she can alienate or transfer her property in any way she pleases without any extraneous control of her husband. She can enter into binding contracts with her husband and proceed against him in law courts, if necessary.

The Arabic word Nikah (marriage) literally means the union of the sexes and in law there are various sources and texts under Muslim law which defines the context of Marriage. Some of them are as follows-:

Under section 2 of Muslim Women (Protection Of Rights On Divorce Act 1986)– Marriage or Nikah among Muslim is a “Solemn Pact” or “Mithaq-e-ghalid” between a man and a woman, soliciting each other life companionship which in law takes the form of a contract.

In Baillie’s Digest- Marriage has been defined to be a contract for the purpose of legalizing sexual intercourse and procreation of children.

In Hedaya- “Nikah” in its primitive sense means canal conjunction. Some have said that it signifies conjunction generally. In the language of law it implies a particular contract used for the purpose of legalising generation.

Ashabah says- Marriage is a contract underlying a permanent relationship based on mutual consent on the part of a man and women.

The Prophet Of Islam is reported to have said: “Marriage is my sunna and those who do not follow this way of life are not my followers”, and that ” There is no monckery is Islam”.

In the case of Shoharat Singh v. Jafri Begum, the Privy Council said that nikah (marriage) under the Muslim law is a religious ceremony.

Justice Qureshi quoted that “The sanctity attached to the institution of marriage in the Islamic system has neither been comprehended nor sufficiently appreciated by outsiders. Marriage is recognised in Islam as the basis of society. It is a contract but it is also a sacred covenant. Marriage as an institution leads to the uplift of man and is a means for the continuance of the human race. The main aim of the institution of marriage is to protect the society from foulness and unchastity. It has also been said that marriage is so holy a sacrament, that in this world it is an act of ibadat or worship, for it preserves mankind free from pollution”.

Also, according to Kefaya–  Marriage is a contract which has for its design or object the procreation of children; it was also instituted for the comfort of life, and is one of the prime or original necessities of man.

Thus, we can say that marriage according to Muslim Law, is a contract for the purpose of legislation of intercourse, procreation of children and regulation of social life in the interest of society by creating-

(1) the restraint of sexual passion;

(2) the ordering of domestic life;

(3) the increase of the family;

(4) the discipline of the same in the care and   responsibility of wife and children.

(5) the upbringing of virtuous children.

Hedaya on the other hand speaks of the ends of marriage as-:

The Prophet also says: “Men marry women for their piety, or their property, or

their beauty, but you should marry for piety” and the purposes of marriage are perpetuation of human race and attainment of

Muslim Marriage as a Civil Contract

Muslim marriage, by some text writers and jurists, is treated as a mere civil contract and not a sacrament. This observation seems to be based on the fact that marriage, under Muslim law, has similar characteristics as a contract. For instance-:

1. As marriage requires proposal (Ijab) from one party and acceptance (Qubul) from the other, so is the contract. Moreover, there can be no marriage without free consent and such consent should not be obtained by means of coercion, fraud or undue influence.

2. Just as in case of contract, entered into by a guardian, on attaining majority, so can a marriage contract in Muslim law, be set aside by a minor on attaining the age of puberty.

3. The parties to a Muslim marriage may enter into any ante-nuptial or post-nuptial agreement which is enforceable by law provided it is reasonable and not opposed to the policy of Islam. Same is the case with a contract.

4. The terms of a marriage contract may also be altered within legal limits to suit individual cases.

5. Although discouraged both by the Holy Quran and Hadith, yet like any other contract, there is also provision for the breach of marriage contract.

In the case of Abdul Kadir vs Salima (1886), the analogy of marriage contract with contract of sale can also be emphasized to be taken as the contractual aspect of Muslim Marriage. Justice Mahmood while describing the nature of Muslim marriage observed :

“Marriage among Mohammedans is not a sacrament, but purely a civil contract; and though it is solemnised generally with the recitation of certain verses from the Quran, yet the Mohammedan law does not positively prescribe any service peculiar to the occasion.  And though a civil contract, it is not positively prescribed to be reduced to writing, but the validity and operation of the whole are made to depend upon the declaration or proposal of and the acceptance or consent of the other contracting parties, or of their natural and legal guardian before competent and sufficient witnesses; as also upon the restrictions imposed, and certain of the conditions required to be abided by according to the peculiarity of the case.”

From the above observation Justice Mahmood could not be held to have taken the view that Muslim marriage is nothing but purely a civil contract. Yet its obiter dicta carries the legal sanctity of ratio decidendi .Also when he approves of Baillie’s view that marriage is also for the solace of life, he is himself highlighting another aspect of marriage, that is, its social aspects.

In the same case, Justice Mahmood also cautioned that Dower (Mahr) in Muslim marriage should not be confused with consideration in the context of civil contract. He says that “Dower, under the Mohammedan law, is a sum of money or other property promised by the husband to be paid or delivered to the wife in consideration of the marriage. “

In Hedaya ,it is laid down, “The payment of dower is enjoined by the law merely as a token of respect for its object (the woman), wherefore the mention of it is not absolutely essential to the validity of a marriage, and, for the same reason, a marriage is also valid, although the man were to engage in the contract on the special condition that there should be no dower.”

Thus, we see that the similarities of a Muslim marriage to a contract are so pronounced that some jurists have treated it entirely as a civil contract.

Muslim Marriage As A Religious Sacrament

Another view is that marriage is not purely a civil contract but a religious sacrament too. Though the sacramental nature of marriage is considered as an Orthodoxy view, it is also supported by the Judiciary. Taking religious aspects into account muslim marriage is an Ibadat (meaning a devotional act).

The Prophet is reported to have said that marriage is essential for every physically fit Muslim who could afford it. The Prophet says “O assembly of youths, whoever among you is able to have, he should marry, for it is a restraint to the looks and he who is not able let him keep fast.”

Moreover, the following traditions may also highlight as to why marriage among Muslims is sacrament in nature.

Prophet Mohammed says- “He who marries completes half of his religion; it now rests with him to complete the other half by leading a virtuous life in constant fear of God.”

He also says- “There is no act of worship except marriage and faith, which has continued from the days of Adam and which will continue in paradise as well.”

Many Judicial precepts have also supported the sacramental nature of muslim marriage. In the case of Anis Begum vs Mohammed Istafa, (1933), where CJ Sulaiman has tried to put a more balanced view of the Muslim Marriage by holding  it both a civil contract and a religious sacrament.  While reviewing Abdul Kadir’s case, he observed  : “It may not be out of place to mention that Maulvi Samiullah collected some authorities showing that marriage is not as a mere civil contract but as a religious sacrament.”

Justice Mahmood’s observation i.e., marriage is a civil contract cannot be appreciated only because that upto some extent marriage resembles with civil contract.

After observing minutely it will be found that besides some similarities there are so many basic differences between the two. For instance :

One may conclude the nature of Muslim marriage by the observation of M.C.

J. Jung : “Marriage is an institution of Ibadat clothed in the legal form of contract regulating sexual intercourse; but its continuance is dependent upon the maintenance of conjugal affection. In the ultimate analysis it can be said that marriage is Islam is neither purely a civil contract not as a sacrament. It is devoid of none but the blending of two.